Beware: If you're lucky the following blog entry might be worth 2 cents...

This morning I switched my tv channel over from Martha Stewart to a news channel where yet another citizen was railing away at our president! It amazes me that there is so much HATE in our United States of America today... and so much of it based on misinformation and bias. That is not, however, my topic for the day. This is:

I tuned out that woman's tirade because of her rage, her hatred, and her overall non-grasp of the American English language. The words I heard from this indignant and angry woman's mouth were '...conversated with...' Prior to commenting on this topic I checked out the accuracy of her word conversate at dictionary.com. As suspected, there is no such word!

How often does this happen? Too often. What's my point? Years ago there was a tv show called 'Grace Under Fire.' It was about an ordinary woman, perhaps undereducated and definitely 'blue collar,' and despite her lot in life, pretty darned intelligent. I will always remember these words from Grace on that show... 'Why is it the news always interviews the village idiot!??!!!'

Here's my answer to Grace. Many news reporters have forgotten their job is to REPORT the news as it is. Instead they want to MAKE news by featuring the dramatic, the accusations, the mistruths, and the misguided.

In my neck of the woods, reporters have every opportunity to listen to and interview some of the most intelligent scientific minds in the world. What do they do instead? They interview the crackpots who seem to enjoy destroying 'big business' because they think 'big business' can afford to share the wealth with them.

Yes, we get our 2 cents worth in on occasion but we really have to push to be heard. Meanwhile, there is a meeting next month. I'm sure the press will be there. I'm sure some of our scientific superstars will be in the audience. Who do you think the reporters will seek out? I'll bet real money on this one... they want to know what the econutz have to say.

What's my point? Good gosh! There I went rambling again!

Oh yes - the point - Don't you just love it when somebody with less than a pea-sized brain goes about changing the language? I'll bet next time the dictionary is revised I'll find conversate in it!!! Scarey, huh?
Posted by sherle at 1:04 PM No comments: 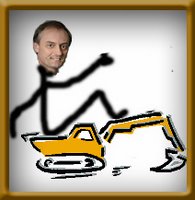 would you buy a used car from this guy? I sure wouldn't! This is Steve Chester, director of MDEQ. They tell me he's a lawyer by profession and he is the one standing by his mantra that our homes are facilities because the law says so!!! His mantra has nothing to do with science. Not only that, the law says so because the MDEQ got the legislators to put that law there in the first place. Chester and his diggers are in backyards all over Michigan telling citizens what they can and cannot do with their property.

We, the taxpaying residents of Michigan, are paying this guy to go into a few of our backyards and then judge us all guilty of owning toxic facilities. He won't even tell us what percentage of the total homes in the Tittabawassee River flood plain he has actually tested - or whose - but I know the Henrys had their property tested. Their testing pictures were in newspapers. I haven't seen any MDEQ workers in any yards near my home and he says my home is priority one - implying it's loaded with dioxin just because it's in the high water area for the big 2004 March flood!!!

Maybe you should just cancel spraying the dandelions in your yard this year because your neighbor in the next block sprayed his. You would be using the same kind of science Mister Chester uses.

I hope you have read the forum piece by Midland Matters and Tittabawassee River Voice in the Midland Daily News today. If not you can find it here at http://www.ourmidland.com/site/news.cfm?newsid=15977446&BRD=2289&amp;amp;amp;amp;amp;PAG=461&dept_id=472539&rfi=6. The same sorry three sent MDN their same sorry opinions. Just for fun I'll respond to them here:

Posted by sherle at 5:43 PM No comments:

What a Week it WAS!

Our friend and cohort, Bill Egerer, founder of Midland Matters, had a chance to speak out for all of us Friday as featured speaker on Off the Record - Weekly Edition #2006-28. Just click on the little icon at beginning of the article to view this PBS presentation. If you don't have time to watch the whole clip, Bill's portion is probably a little past half way into the program. Just scoot the little slider over with your mouse.

Bill was cool and calm at the roundtable with three totally uninformed but biased people. As he presented the facts to this group, they failed to 'trip him up' with their tunnel-visioned questions based on environmental extremist propoganda. It would appear that Bill was the only one of the four prepared for this interview.

Here is a link directly to the .pdf file of the Dow Remedial Investigation Work Plan. It's a pretty big file so if you have dial-up you might want to download it at the library or somewhere else with high speed internet. Dow & MDEQ will discuss this at the next community meeting, planned for February 9. This article also informs us that the transcript of the November 9 meeting presented to us by Dow and MDEQ is now available online. 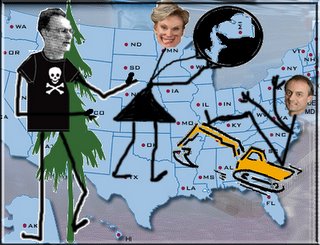 Bill, your deserve a break for surviving the den of liberalism called Public TV. This one's for you! (the picture, but I'm sure you'll enjoy the article as well)

You know, lots of residents notified Ms. Granholm that we wanted her to sign the Homeowner's Rights legislation, but she was only hearing her special friends, wasn't she? Don'tcha think she & her friend Stevie should quit playing with our state?

Just had to share this article by Dr. Gilbert Ross as he gives us another new look at skewed 'facts' and resulting fears. in this articleNever Mind: From Soda to Psychopharmaceuticals, Science Marches on with New Data. How often do our Luddite environmental extremist neighbors try to deter science in order to protect us from the bad guys? Dr. Ross gives us a couple more examples.
Posted by sherle at 12:14 AM No comments: