Like Fishing? We have GREAT Weather for it in Freeland this Weekend!

This weekend is an angler's delight: and you can read all about it in The Midland Daily News! The sun's shining... the sales are on all over town... and there's all kinds of food and fun for the family!

I heard that you can find some pretty good hotdogs and cookies at Leaman's Green Applebarn! Stop by and try them. We had the peanut butter cookies and they're great! While you're out, do a bit of rummaging... bargains abound. You might even find a treasure or two.
Posted by sherle at 4:11 PM No comments:

According to this Midland Daily News article, the key litigants in the dioxin lawsuit are opposed to the new legislation proposed by state Senators Mike Goschka and Tony Stamas, and state Representative John Moolenaar. Of course they are! They want to spend the rest of their lives waiting for money to fall off the Dow Chemical money tree.

These are the same people, along with the ragtag lonetree gang, that Ms. Granholm, current governor of Michigan, listened to and insisted on gratifying by her veto of Senate Bill 390 - the homeowners' fairness bill. These are the same people who brought disrespect and the trashy label ('facility') to our home town with their unproven accusations about extremely minute amounts of dioxin that could possibly - not probably - be in our back yards.

This weekend, April 28 - 30, 2006, the friendly little town of Freeland will be hosting the Walleye Festival. If you're not a fisherman there will be loads of other activities - including a township-wide rummage sale. You can hardly drive down some of the streets for the traffic and crowds, so even if you don't want to join the fishing contest, join the crowd! Come on over to Freeland. Stop in at some of the rummage sales and other activities. Meet our real residents and find out why so many people actually want to live in our town!!! 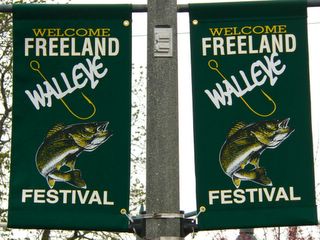 Posted by sherle at 4:24 PM No comments:

Redneck gets another petition going...

You'd think even the MDEQ bureaucrats would get tired of her ranting after a while, wouldn't you?

I just read an article in the Saginaw News - Groups seek dioxin tests downstream - and another in the Bay City Times - Concerned citizens fishing for help from Feds. It seems the Lone Tree Council has gathered up a few fishermen, residents and enviro-wackos from the Bay City area to petition the ATSDR (Agency for Toxic Substances and Disease Registry) to conduct a 'health consultation' to evaluate health impacts of eating fish from the Saginaw River. Is this another attempt at 'reinventing the wheel' or is Michelle Hard-Redneck just trying to scare another group of residents?

Hmmm - let's get this straight now.

Herd-Retorik also wants class action for litigants along Tittabawassee River floodplain to make Dow pay them an overblown amount of money for their property. This case is currently sitting in wait in the Michigan Court system.

Meanwhile, Dr. Sam Shaheen, a prominent local physician and developer, has bought at least six properties along the river for a total of more than $800,000, and says he actually bought more than that... this in a time when house sales are DOWN across the nation! See Doctor follows through on offer to buy Tittabawassee River land.

Hurd-Rednek would really really like to make Dow Chemical do all sorts of expensive remediation and clean up along the Tittabawassee River floodplain quickly - before results of various tests (U of M dioxin in soil vs. dioxin in humans in area and assorted wildlife tests by MSU) are reported. Actually, based on her continual comments about the company, she would like to chase Dow Chemical right out of Michigan. After all, her group, the Lonetree Council, was created primarily to 'get Dow' - back in the 1970's.

She seems to think she knows more about dioxins than the scientists in Midland who worked with dioxins most of their lives and developed the means by which dioxins can be measured in tiny quantitites. She seems to think she knows more than Dr. Neill Varner, medical director for the Saginaw County Health Department, who is also quoted in the Saginaw News article. Dr. Varner was learning everything he could about dioxins back in the 1960's when Ms. Riddick was still just a tadpole in her local nursing school pond.

According to the Saginaw News she said 'Contamination now threatens anglers and subsistence fishermen who rely on the river for food. This God-given source of protein (fish) should be accessible to everyone.'

Is that a stretch... or what? We know dioxins do not float around in water... they are deposited in soil and in fat. I guess that means pretty much only bottom-feeders will carry any levels of dioxins in them. That would be primarily catfish, bullheads and carp. Take my word for it...
For your convenience I've combined both of today's news articles and you can find them here in .PDF form.
Posted by sherle at 4:26 PM No comments:

Still hope for all of us who own a 'facility' along the Tittabawassee River floodplain?

Maybe... Today the Midland Daily News published an article: Lawmakers propose trio of bills to deal with dioxin issue. If you missed it, read all about it now. Sounds like there are three separate bills currently going through Michigan Congress, in various states of completion.

I sure hope Ms. Granholm signs this time. It just seems unAmerican for the State of Michigan to say my property is a 'facility' without confirming it is contaminated, don't you think?
Posted by sherle at 10:54 PM No comments:

Midland Daily News - News - 04/09/2006 published a biased opinion titled - Governor should hold fast in her decision to clean up dioxin. It was written by a local Freeland boy known by many of us (probably most) as the guy who is against 'it' if mainstream U.S.A. is for 'it'! Should we be surprised it took him three months to construct a biased response to the letter we wrote to Ms. Granholm and published in MDN 01/22/2006?

Which reminds me: Don't forget Thursday, April 13, 2006 - Ecological Risk Assessment and the Tittabawassee River, Why, How, and Who Cares? This is first in a series of presentations by a group of dedicated graduate students from Michigan State University about their wildlife studies along the Tittabawassee River floodplain. All presentations will be held at the Chippewa Nature Center in Midland. See this PDF file for details.
Posted by sherle at 1:24 PM No comments: