ABC12.com: Disputes over wetlands continue and in case you missed it, you can read the transcript and even view the video report. Excellent job, Terry! Just like the Kozaks say, DEQ is out of control! They don't just have control of the 16% wetlands in Michigan... and of course any natural bodies of water... rivers, streams, inland lakes, the Great Lakes, but yes they also have control over sand dunes... and I'm sure there are other areas in Michigan I just haven't read about yet!!!

Oh! I know!!! They also are responsible for anyplace in Michigan where there is a possibility that an endangered species could live, whether it lives there or not!!!

Just as Tom Kozak said, the MDEQ is out of control. They apparently answer to nobody... and their 'science' is whatever they want it to be to prove what they want to prove! There is no oversight committee or scientific group making sure they do things correctly. We citizens pay their big fat salaries... and when we ask them why they named our land a 'facility'... or why they won't let us develop our property, the answer is 'It's the LAW!!!' Then they say 'We don't make the laws, we just make sure the law is carried out.'

Now that's all a bunch of crap! The MDEQ and their special friends, the environmental extremist wackos hassle our legislators into making those laws! Our legislators go ahead and make the laws because they don't realize what their constituency really wants! The extremists go bopping around Lansing, lobbying as representatives of residents. The majority... that would be us..... stay at home, mind our own business, improve our homes, improve our property, until somebody who works for the DEQ notices you did it without getting a permit from them. Then all Hell breaks loose!

Thanks to MDEQ and their royal monarch, Steve Chester, the Michigan Taxpayer is rapidly becoming totally under the control of DEQ bureaucrats!
Posted by sherle at 3:33 PM No comments:

Okay, what's going on?!!!?? Last week the email went out announcing a Community Advisory Panel meeting presented by MDEQ... supposed to be concerning the dioxin controversy in the Tittabawassee River floodplain and extended to include the Midland area near Dow Chemical. Didn't read about it in the newspaper until... today!

For some reason our Saginaw News was not delivered today but just as I was leaving for physical therapy our friend Howard stopped by and showed me the article in his freshly delivered Saginaw News... announcing the meeting will be held Wednesday - WOW!!! two days notice!

Got home, logged into the internet and right there on my Yahoo Homepage what did I see?... The meeting featuring Linda Birnbaum is cancelled! Ms. Birnbaum is ill; the meeting will be rescheduled. Here is the article as I copied it from The Midland Daily News:

Dioxin meeting scheduled for Freeland canceled
Kathie Marchlewski, Midland Daily News 11/15/2004
A community meeting for residents wanting to learn more about dioxin and health has been canceled.
The speaker, Dr. Linda S. Birnbaum, is ill and won't be able to attend the meeting scheduled for Wednesday at Freeland High School.
The meeting will be rescheduled as soon as possible, said Michigan Department of Environmental Quality spokesman Bob McCann. The MDEQ had requested that Birnbaum come to the area to offer "basic background" information on dioxin. The agenda did not include discussion about the local contamination issue or ongoing negotiations between the state and The Dow Chemical Co., though Birnbaum was planning a question and answer session on dioxin and potential health effects.

Well, go figure! This is the second cancellation. Hmmm! What's it all about? Stay tuned.
Posted by sherle at 4:35 PM No comments:


To our knowledge, MDEQ has not yet presented us with information from active working scientists. Please do not miss this important meeting presented by MDEQ. It should be interesting. I feel it is vital that we are totally aware of the narrowly focused attitudes that lead to our homes being designated 'facilities'. Let's all show up and let these people see who the real majority are!
Posted by sherle at 2:24 PM No comments:

A week's worth of Updates... 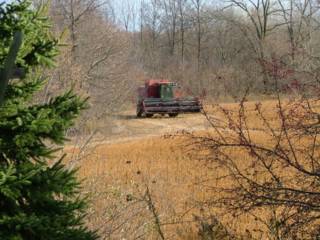 What I love most about Freeland... It is still a farming community.

In case you missed the Bay City Times... Bangor Township family takes on DEQ over dirt piles Click the title to read two articles concerning treatment of ordinary citizens by the MDEQ. Fortunately some folks have come to their aid. Yes, we the people are finally getting our points across.

Please read Dr. David Garabrant's editorial in the Midland Daily News concerning the U of M dioxin study... privacy is key.
Posted by sherle at 10:12 AM No comments:

This IS about the Environment... and more 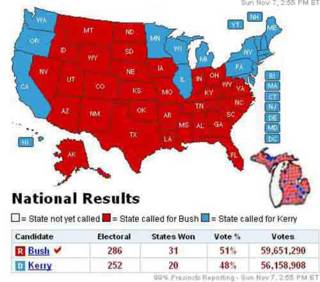 Pundits thought the 'Losers' had this election all wrapped up. They finally decided too many of the wrong people voted in the 'Jesus
states.' 'Jesus States' are all the red ones! I was disappointed Michigan was NOT included until I looked at Michigan... lower right... and found out that, thank God, Michigan still has more 'Jesus counties' than not.


The mass news media, tort lawyers, extremists, and every other group based on the belief that the average human individual is incapable of taking care of her/himself, joined the Democratic party in wondering what went wrong.

Received a note from MDEQ...

Cheryl Howe sent this brief press release to everybody on her dioxin CAP mailing list in case we hadn't seen it elsewhere. Since I've been busy the past few days... I hadn't yet read it. Wednesday morning news where I was consisted of, 'I need a little blood sample; here are your meds; more pain pills? ... again?...MORE pain pills?'..then daughter number 4 phoned at 6:00 a.m. " Did you see the news? Your man won!'...and I thought, YES!!! Sometimes the good guys still win!

Had a little 'knee work' done. If I was a guy I'd probably call it an 'old sports injury' but all I will say is... total knee replacement surgery. Great doctors... great nursing care! Alas, no internet availability. The good news is I was too busy to care. Thanks to a great Mid-Michigan Regional Hospital team everything is looking great! Now I'm ready to catch up on the rest of my email... lots of reading to do! It's tough using a laptop when you cannot really put it on your lap... and hard to use the desktop computer because I can't sit for hours with my leg in a downward position.

About the dioxin situation... I sure was glad to read Cheryl's update!!! It came under Lt. Governor Cherry's letterhead. With him driving I'm confident we will get there!
Posted by sherle at 11:15 PM No comments: