... was so involved in the dissertation I forgot to tell why Barber's article in the Saginaw News motivated me. I haven't done much blogging lately because it really bothered me that I could dislike a whole group because I distrust their leadership.

I don't dislike the whole group. I do feel sorrow that they were caught in the trap set by such professional activists. It occurred to me that Miller & Riddick were both around to get sucked into the Greenpeace propaganda machine 'way back when.... Why else would a simple highschool teacher get so involved in a hate campaign against one successful local business? Henry Dow did start his little company right here in mid-Michigan. Why else would a simple nurse speak so venomously of Dow Chemical in particular? She's even against MDEQ now that the 'culprit' and the 'regulator' are working together. Ya know, I don't even dislike them... I think the word is more like..... pity.
Posted by sherle at 6:07 PM No comments:

...It's about me. You may have noticed less updates here at TRVoice lately. I thought it was just because I'm too busy, but truth is I didn't feel motivated; wasn't sure what I wanted to write - or why.

Thanks to Barrie Barber, reporter for The Saginaw News & his big frontpage spread in Sunday's paper yesterday - Group won't back down from Dow - I come back rejuvenated. Barrie's series of articles was well written but perhaps he didn't go back far enough.

Perhaps there is a core to Lonetree beyond the nuclear plant fiasco. I speak now to my contemporaries. Remember when an international bunch of gangsters visited Midland - attempting to make trouble in the Tittabawassee River in the vicinity of Dow Chemical? Don't remember? How about if I mention the name Greenpeace? Ah! Now you remember! What were they doing in the river? Why has Greenpeace become persona non grata in the United States?

Click on my little poster to see if you know anybody in the photos. Yup, that's right. Some of them are from right here in mid-Michigan. 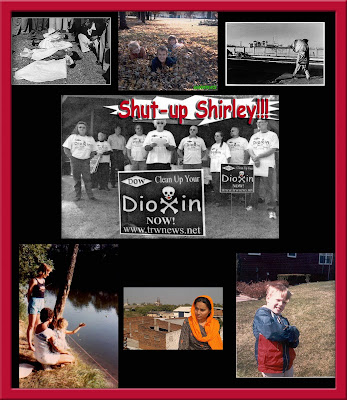 Whoa! Now is that terrorist tactics - comparing dead babies with perfectly healthy American children? Recognize the little blonde poster child? Well, I don't but... That's right folks... Greenpeace's poster children in 2003 were little Ruby from Bhopal and little Paul from the Lonetree pack of litigants/terrorists right here in the good ol' U.S. of A! Watch out for the bullies, people... they wear many masks.

Posted by sherle at 4:13 PM No comments: