...grown in my own backyard - you know - one of those backyards in the Tittabawassee River floodplain... you know the yards our own Michigan Department of Environmental Quality and a few misguided people denigrated with their accusations.

I'm sure you've heard about the E. coli epidemic in foods grown in California. This article from Detroit Free Press actually doesn't cover the more recent information I heard this morning. Cleaner spinach starts in the field The latest news tells us some bodies of water in farming areas are contaminated with E. coli. They tell us that these dangerous creatures (bacteria are creatures, aren't they? - microscopic but nonetheless creatures) actually permeate the foods they invade. In other words, you can't wash it off like you can wash lesser contaminants.

Hmmmm! E. coli = makes people very sick and kills people! Dioxin = insignificant difference between our local backyards and the rest of the country and it hasn't been known to kill anybody even in gigantic quantities (remember Yushchenko?)
Posted by sherle at 12:00 PM No comments:

can be seen in the Midland Daily News - Disposal site eyed by Dow? I was just about to say something nice about some of the people in this article but changed my mind when I read it! I guess it just goes to prove 'old hippies never die - they just continue to make themselves look silly.'
Posted by sherle at 4:00 PM No comments:

..so I searched my computer for this photo which I took in springtime 1962. It shows my husband Frank and our four oldest daughters, ages 6, 5, and twins aged 4. It was pretty cold that day so the 2 year old and 2 month-old baby were in the house. This was our second springtime along River Road and our second flood. Not sure how this pic survived since most of our family photos were destroyed in the flood of 1986. 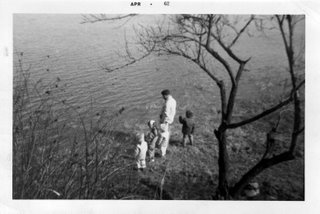 This photo depicts why I speak up against the faulty logic passed on by environmental activist fear-mongers. They say '...what about the babies & pregnant mothers?' and all that scare tactic stuff! Well, we were the mothers. Our children were the babies!!! ...and we weren't the only ones. There were generations before us along the Tittabawassee River plain. There were plenty of mothers... plenty of babies! Most of us were and are healthy! Past generations along this river plain lived long lives back before it became almost common to live for 90 plus years!!! We are the test and the proof that fear-mongering is just that - fear-mongering!!!

...so here is that article that inspired today's tirade:
The rain beat down for 27 days - so says the Midland Daily News. If you're even a few years more than 20 years old I'm sure you remember that year! I'll remember it. We had over five and a half feet of water in our house... and it stayed and it stayed. Guess who cleaned it up! We did - some of our children and my husband Frank and me!

A while back I promised to share my comments on the August 15 University of Michigan meeting when Dr. Garabrant & his team discussed results of the two-year blood serum/soil study. I took a while, but here it is: