Midland Daily News has an update

on the saga of the pitiful few who insisted on calling their own homes worthless in hopes of getting money from the big chemical company... Dow appeal of class action status one year old. Here's the latest quote from Ms. Henry...

"We are now almost four years into this lawsuit, yet the argument is still over whether we should be a class action lawsuit or not," Kathy Henry said. "Saddam Hussein has had a speedier trial in Iraq than we have had here in Michigan. There's something very wrong with that. "

Why should she expect 2,000 residents would want to be included in her battle for a free buck anyway? She and the rest of her Lonetree gang should have just gone ahead with their lawsuit without trying to include the rest of us on the Tittabawassee River floodplain. Her lawsuit would have been over by now! Of course we all know the class action suit wasn't really her own idea... she & her little group are really just pawns of the local professional environmental extremists.

Do you suppose she's finally getting tired of this silly game?
Posted by sherle at 11:56 PM 2 comments:

I went to a meeting Wednesday...

and planned to tell you all about it on Thursday... but then I brought in the day's mail. You must read this thing. What sort of person writes an anonymous letter anyway? 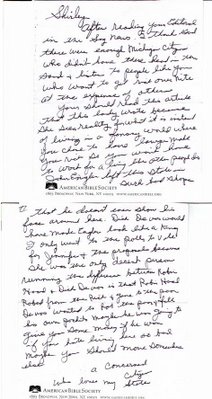 This person is not only semi-literate but doesn't even know anything about me! He or she was apparently all bent out of shape about a letter I wrote to the editor of The Saginaw News in which I explained my reasons for needing a change in Michigan leadership. He or she mailed it out the day after election results were final but nevertheless was too spineless to even sign the letter! Just for giggles, click here if you want to read it and the referenced newspaper letters in .pdf format.

I spent too much time putting together a response and then decided it doesn't belong here. I don't need to give you details of the November 8 DEQ/Dow meeting because, between the two of them, a couple of local newspapers did a pretty good job of coverage. In case you don't read both of these papers, I've saved the articles for you.

The new guy at Saginaw News seems to be interested only in the whining and complaining of local econutz. Read it here: Study critics seek results

Dioxin testing progressing, published in the Midland Daily News, is a nice straight forward report about the meeting.

What did I see at this meeting?

...employees of a large company and employees of a large bureaucracy working together to work out details to the satisfaction of a few disgruntled environmental extremists, the general population along the Tittabawassee River floodplain who just want the whole dioxin situation to go away, and a couple of litigious residents who are afraid their dreams of a big payoff from the 'chemical giant' might never be fulfilled! I was also disappointed to see another whole layer of bureaucracy added to the already overabundance of government involvement in my backyard. This group calls themselves 'NRDA (Natural Resource Damage Assessment) Trustees' whatever that is...and is apparently a representative group of government employees including the very boring lawyer who gave the presentation for another DEQ member who was not able to attend, admitting he knew nothing about what he was presenting.

God bless our veterans on this, their day, and a great big Thank You to our fantastic military personnel who are defending and protecting our families and our country today! I don't normally do much with those forwarded things but want to share this email I received from a friend this morning. Today I especially pray for my dad, Tony Grammatico, who served in WWII and my Uncle Arthur Hintz who served in WWI. We will never forget you.

Posted by sherle at 2:02 PM No comments: